• Transport performance on inland waterways in the European Union amounted to 111.2 billion tonne-kilometres (TKM) in the first three quarters of 2019.
• As a result, Rhine countries (Belgium, France, Germany, Luxembourg, the Netherlands, Switzerland) reached 91.3 billion TKM, which represents a share of 82%, compared to 84% in the same period of 2018.
• Transport in Danube countries (Austria, Bulgaria, Croatia, Hungary, Romania, Serbia, Slovakia) went up by 18.4% to reach a value of 19.8 billion TKM. Their share in EU transport performance increased from 16% to 18%. 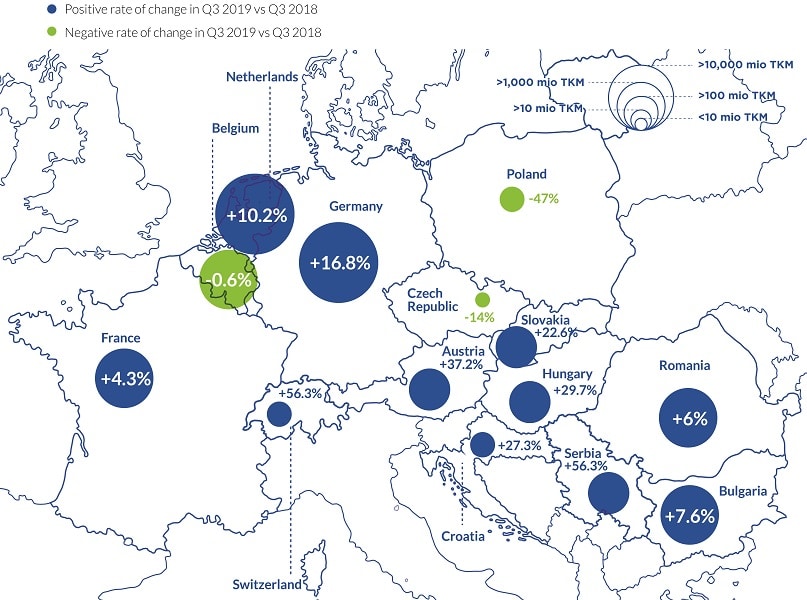 FIGURES 2 AND 3: TRANSPORT VOLUME FOR DRY AND LIQUID MASS CARGO ON THE TRADITIONAL RHINE (IN MILLION TONNES)

Chart by Visualizer
Source: Eurostat [iww_go_qnave]
For Belgium, Statbel figures for the 2019 quarters were corrected in light of the data available from the waterway administrations in Belgium (De Vlaamse Waterweg and SPW Service Public de Wallonie).

TABLE 1: IWT FOR THE THREE LARGEST GOODS SEGMENTS IN GERMANY (IN THE FIRST NINE MONTHS OF EACH YEAR, IN MILLION TONNES)

FIGURES 9, 10, 11, 12: CONTAINER TRANSPORT ON THE TRADITIONAL RHINE, THE ALBERT CANAL, THE SEINE, THE ELBE, THE MITTELLAND CANAL AND THE WEST GERMAN CANAL NETWORK (IN 1,000 TEU)

IMPACTS OF THE COVID-19 CRISIS ON EUROPEAN INLAND NAVIGATION