• Cargo transport on the traditional Rhine was 6.4 % higher in 2019 than the previous year, when low waters had inflicted losses on cargo traffic. But the result in 2019 was still 6.4 % lower than in 2017. The recovery could not be completed, partly because of modal share losses and partly because of a weak macroeconomic climate.

• In western Europe, several cargo segments had lower results in 2019 compared to 2018. This was particularly the case for coal and iron ore. Growing segments were chemicals (in all countries) and partly also sands, stones and gravel (in France and Germany), while this segment decreased in the Netherlands and in Belgium due to environmental policies.

• On the Danube, iron ore traffic increased in 2019, as did the transport of agricultural products, foodstuff and feedstuff. Together, the steel and the agribulk segments account for 60% to 70 % of transport volumes on the Danube. 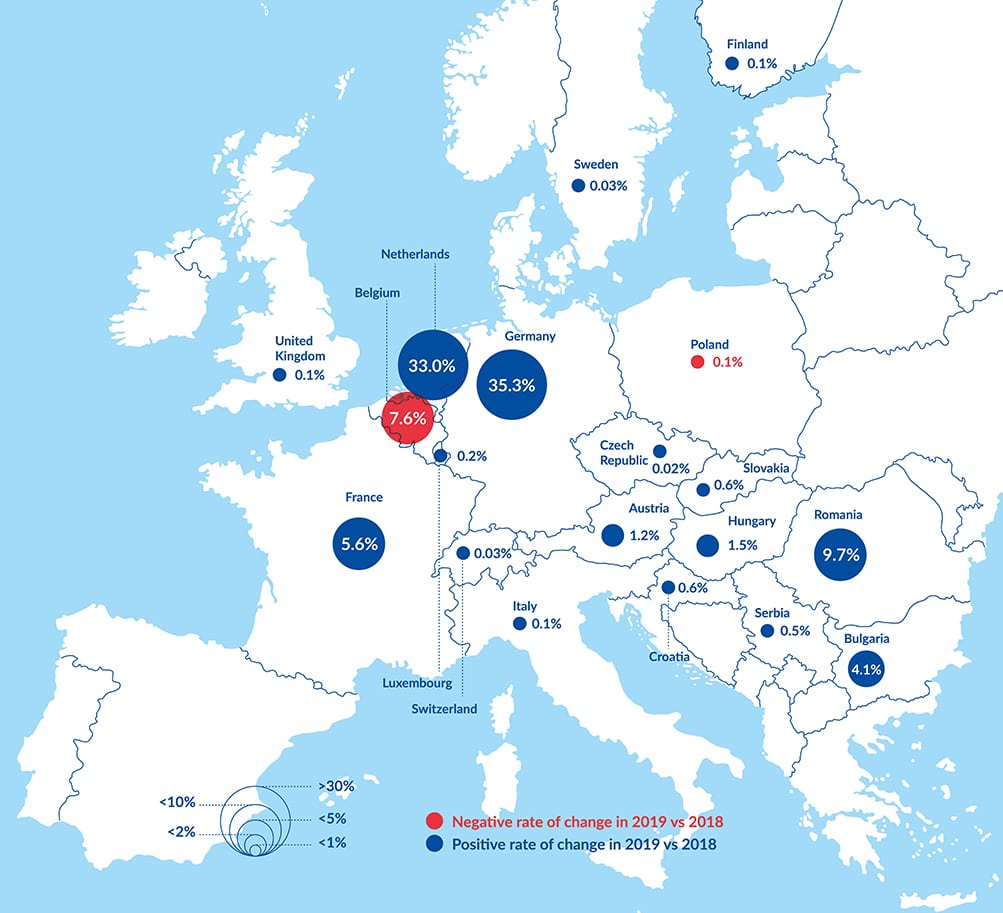 Sources: Eurostat [iww_go_atygo], OECD (Switzerland), Statistical Office of the Republic of Serbia
The share of IWT performance in Europe in 2019 for Belgium is an estimation based on 2019 data from the Flemish and Walloon Waterway administrations.


Sources: Eurostat [iww_go_atygo], Statistical Office of the Republic of Serbia, OECD (Switzerland)
The 2019 value for Belgium is an estimation based on 2019 data from the Flemish and Walloon Waterway administrations.


Sources: Eurostat [iww_go_atygo] and OECD
*Data for UK and Italy not yet available for 2019. The value for Belgium is an estimation based on 2019 data from the Flemish and Walloon Waterway administrations.


Source: Eurostat [iww_go_atygo]
2019 values include an estimation for Belgium based on 2019 data from the Flemish and Walloon Waterway administrations.


FIGURE 4: INLAND WATERWAY TRANSPORT PERFORMANCE IN RHINE COUNTRIES ACCORDING TO TYPE OF TRANSPORT IN 2019 (IN BILLION TKM)


Source: Eurostat [iww_go_atygo]
The values for Belgium are partly estimated (see notes above).


FIGURE 5: INLAND WATERWAY TRANSPORT PERFORMANCE IN DANUBE COUNTRIES ACCORDING TO TYPE OF TRANSPORT IN 2019 (IN BILLION TKM)


Source: Eurostat [iww_go_atygo]
Statistical Office of the Republic of Serbia. 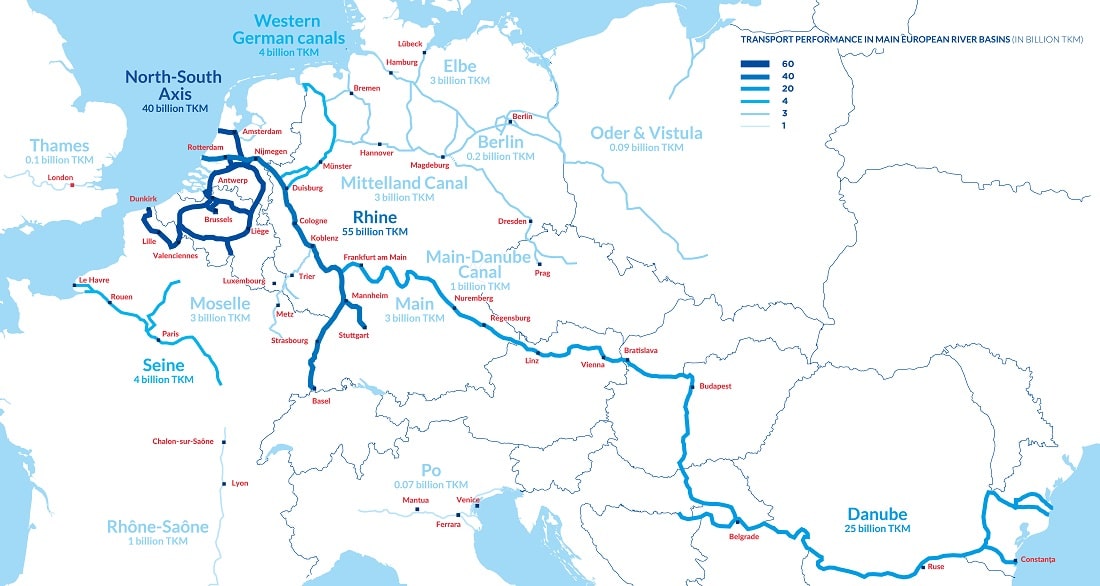 
FIGURES 7 AND 8: GOODS TRANSPORTED ON THE TRADITIONAL RHINE BY TYPE OF GOODS* (IN MILLION TONNES) 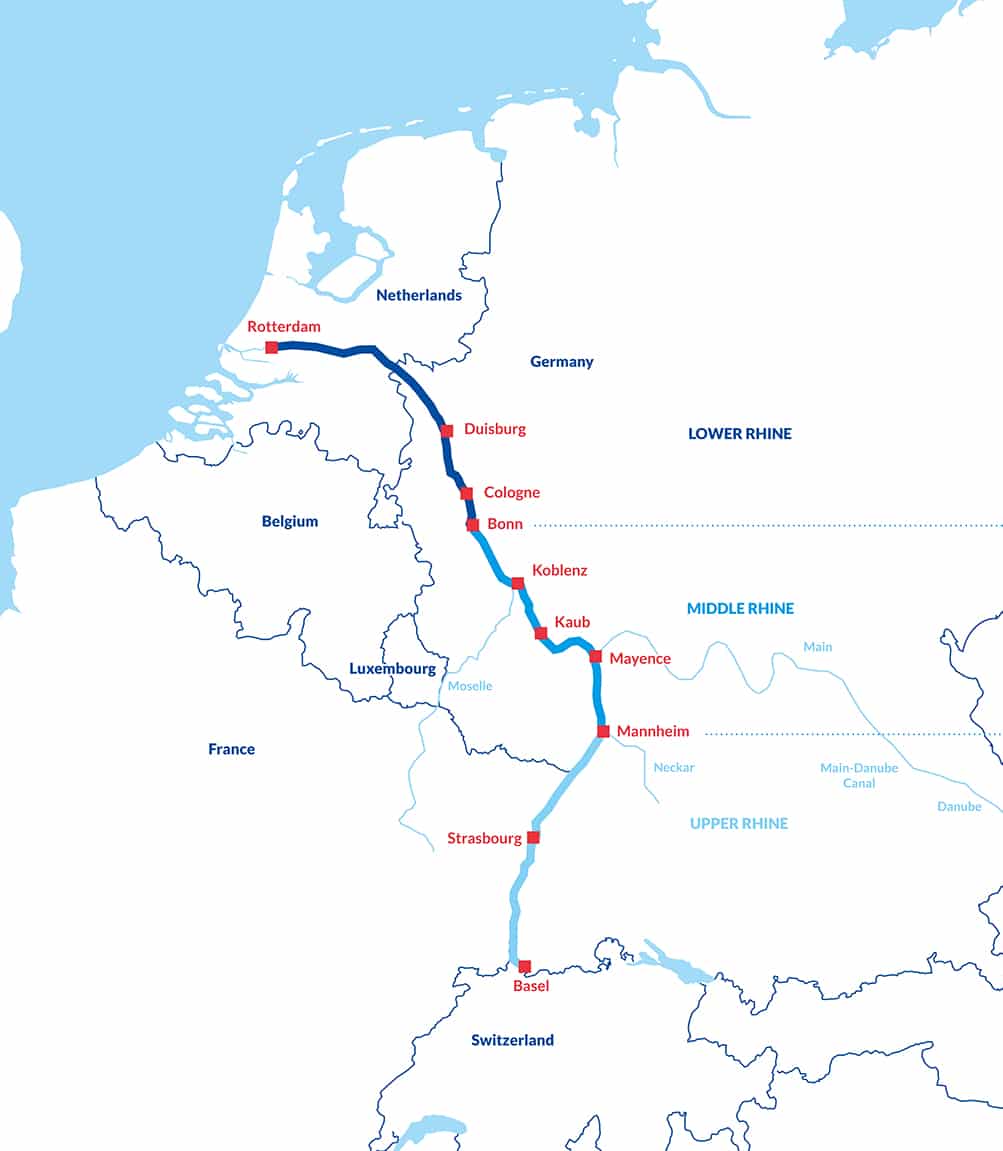 FIGURE 9: RHINE TRANSPORT ACCORDING TO RHINE STRETCH (IN MILLION TONNES)


TABLE 1: VARIATION IN TRANSPORT VOLUME ON THE TRADITIONAL RHINE AND PER RHINE STRETCH


Source: CCNR based on Destatis

Inland waterways in the Netherlands 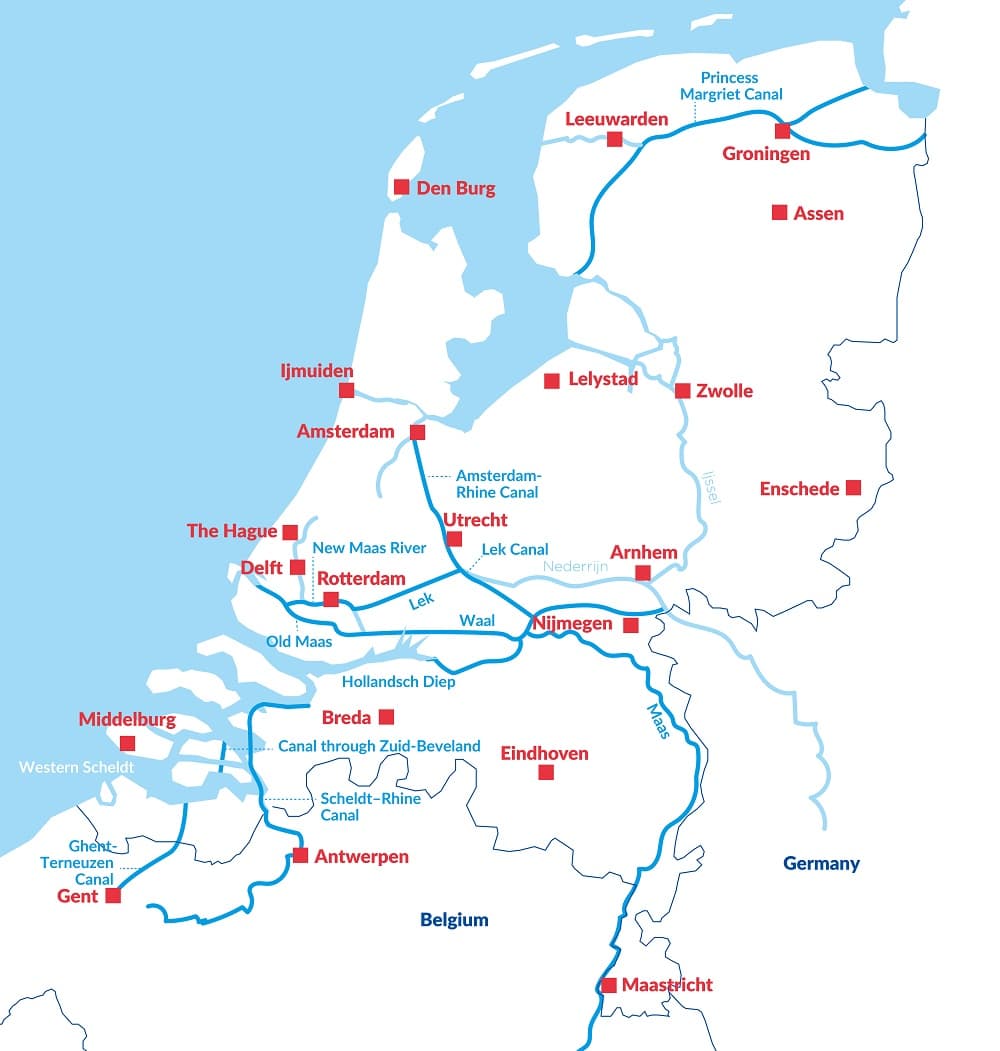 FIGURE 10: THE NETHERLANDS – TRANSPORT VOLUME PER WATERWAY* (IN MILLION TONNES)


FIGURE 11: THE NETHERLANDS – TRANSPORT VOLUME PER WATERWAY* (IN MILLION TONNES)

FIGURE 13: GERMANY – WATERWAYS IN WESTERN AND SOUTHERN PARTS OF THE COUNTRY (IN MILLION TONNES)

FIGURE 14: GERMANY – WATERWAYS IN THE NORTHERN AND EASTERN PARTS OF THE COUNTRY (IN MILLION TONNES) 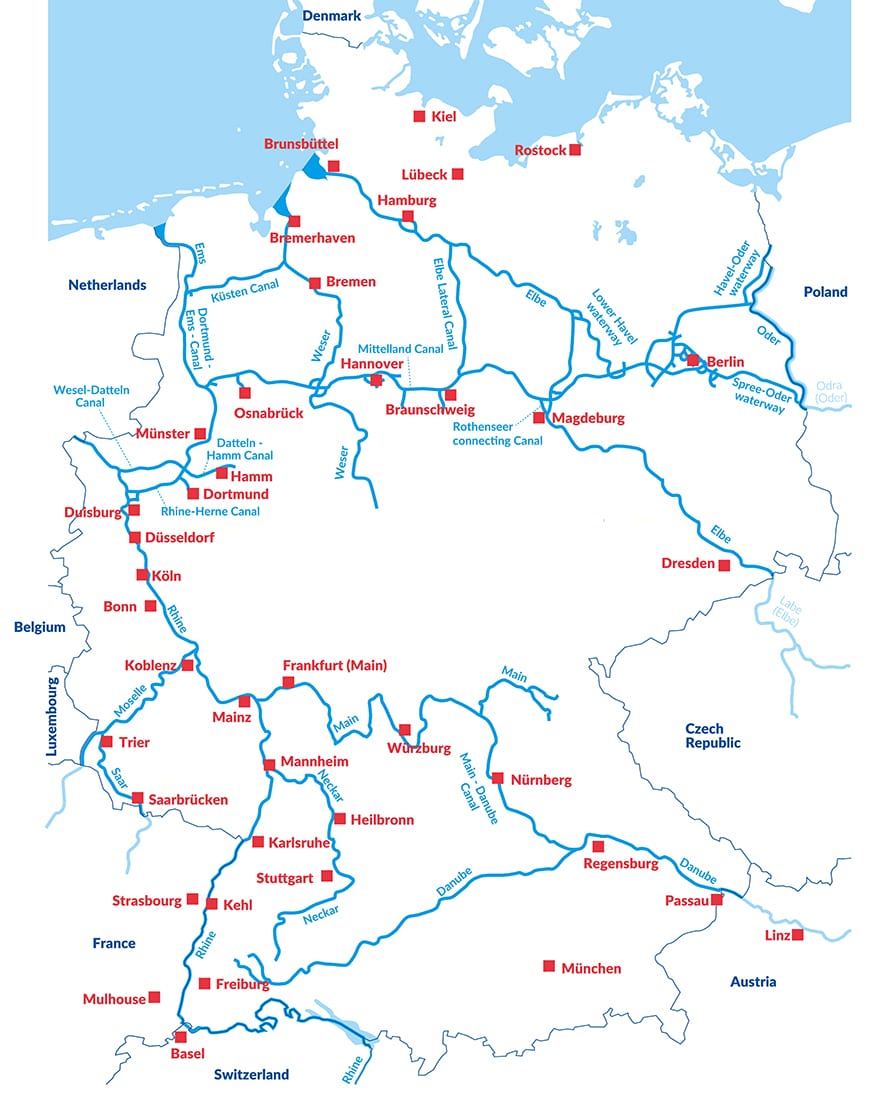 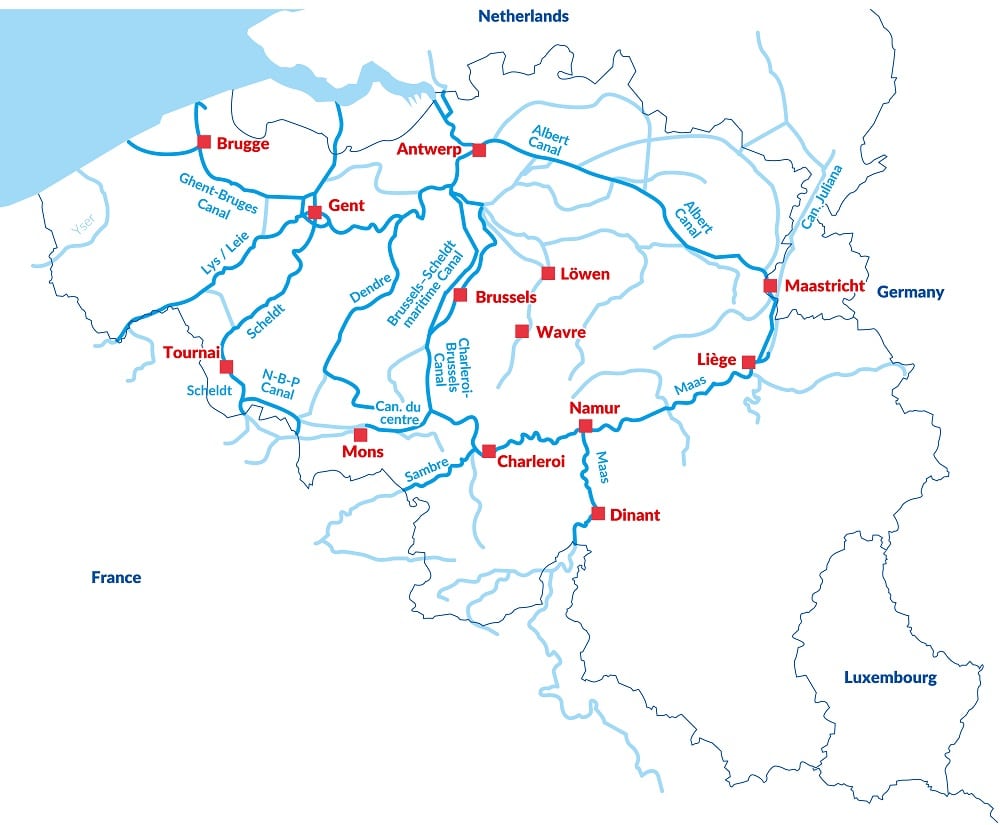 
Source: De Vlaamse Waterweg
*Data for chemicals and fertilizers were not available according to the same definition for the years before 2016. 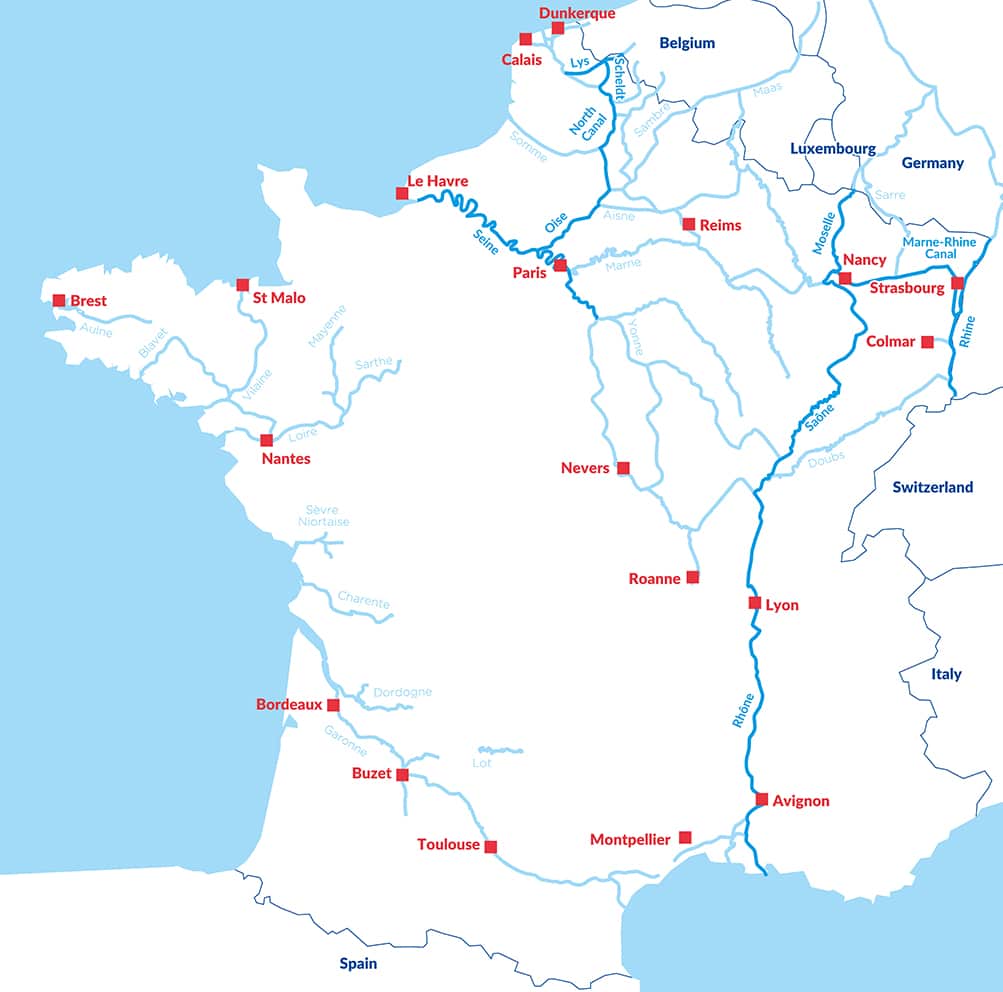 
Source: VNF (data are based on goods classification NST/R)

IWW TRANSPORT PER TYPE OF GOODS ON THE DANUBE*
*The present part is based almost entirely on the Market Observation report of the Danube Commission. 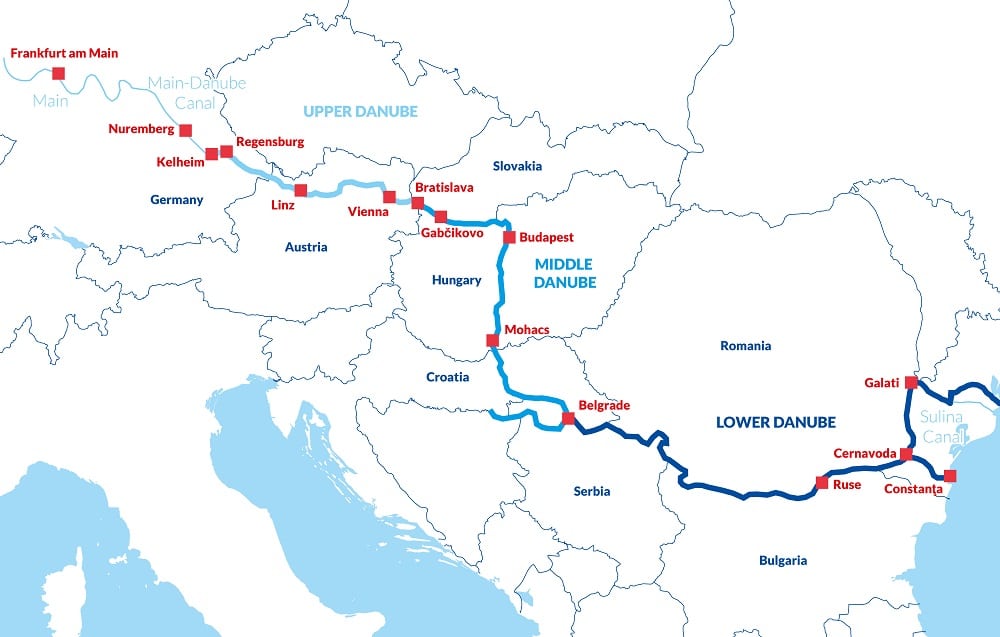 FIGURE 22: GOODS TRANSPORT ON THE UPPER DANUBE* (IN MILLION TONNES)


FIGURE 23: GOODS TRANSPORT ON THE MIDDLE DANUBE* (IN MILLION TONNES)

Inland waterway transport on the Lower Danube in Romania

FIGURE 24: INLAND WATERWAY TRANSPORT ON THE LOWER DANUBE IN ROMANIA* (IN MILLION TONNES)


Sources: Eurostat [iww_go_atygo] and CCNR analysis
*For iron ore, sands, stones, and mineral oil products, data for the years before 2014 were not available.


FIGURE 26: CONTAINER TRANSPORT ON THE TRADITIONAL RHINE (IN MILLION TONNES, NET WEIGHT OF GOODS IN CONTAINERS), 2009-2019


FIGURES 27 AND 28: CONTAINER TRANSPORT ON THE TRADITIONAL RHINE, DOWNSTREAM VERSUS UPSTREAM TRAFFIC AND LOADED AND EMPTY CONTAINERS (IN 1,000 TEU)


FIGURE 29: CONTAINER TRANSPORT IN NORTHERN AND EASTERN PARTS OF GERMANY* (IN 1,000 TEU)


FIGURE 30: CONTAINER TRANSPORT IN WESTERN AND SOUTHERN PARTS OF GERMANY (IN 1,000 TEU)


Source: VNF
*The French Rhine is not shown here as, in the French statistics, only French Rhine ports are taken into account, although container transport on the Upper Rhine is also fuelled by German and Swiss ports.

Container transport per country in Europe


Source: Eurostat [iww_go_actygo]
*The figures for the countries cannot be added together because this would incur double counting. The total value for EU-28 takes into account cross-border container traffic.

FIGURES 34 AND 35: IWW MODAL SPLIT SHARE EVOLUTION IN RHINE AND DANUBE COUNTRIES* (IN %, BASED ON TONNE-KILOMETRES)

Source: Eurostat [tran_hv_frmod]
*Share of inland waterway transport performance in total (IWT + Road + Rail) transport performance. Road data include the transport performance of trucks registered in foreign countries, according to the new series [tran_hv_frmod] made available by Eurostat only recently. Road data registered in the Eurostat database for the series [road_go_ta_tg] used for the calculation of modal split figures in previous reports were based on nationality of registration of the vehicle and not on transport on national territory. This methodological difference has some effects on the modal split shares presented in previous reports both per country and per goods segment. For this reason, it was decided not to show IWW modal split evolution per goods segment in this year’s report until a better methodology can be found.

FIGURE 36: MODAL SPLIT SHARE OF INLAND TRANSPORT MODES IN THE EU-28 (IN %)


FIGURES 37, 38, 39 AND 40: TRANSPORT VOLUMES FOR LARGE TRADITIONAL GOODS SEGMENTS IN INLAND WATERWAY AND RAIL TRANSPORT IN GERMANY (IN MILLION TONNES)

Source: Eurostat [rail_go_grpgood], [iww_go_atygo]
*The name of this product group within the NST 2007 classification is coal & crude oil, but the share of coal is 99.9 %. Crude oil is transported mostly by pipeline, not by barge or rail.


FIGURE 41: TEU VOLUMES TRANSPORTED BY RAIL AND ON INLAND WATERWAYS IN GERMANY (IN MIO. TEU)