• Transport volume on the traditional Rhine increased by 5.4% in 2021, and transport performance by 4.5%, compared to 2020. Coal (+28.5%), Iron ore (+15.4%) and metals (+11.9%) registered higher percentage growth rates.
• For container transport on the traditional Rhine, 1.99 million TEU were recorded in 2021. In general, container transport on the Rhine has weakened in recent years due to a combination of macroeconomic, natural and port related factors (slowdown in world trade, low water periods, congestion in seaports).
• On the Upper and Middle Danube, transport volumes were on average lower in 2021 than in 2020. An important exception was the Austrian Danube around Vienna, where considerable growth was observed. The Lower Danube region, in particular the canals connecting the Danube to the Black Sea, recorded a clear upward trend in goods transport.

TRANSPORT IN EUROPE AND BY COUNTRY 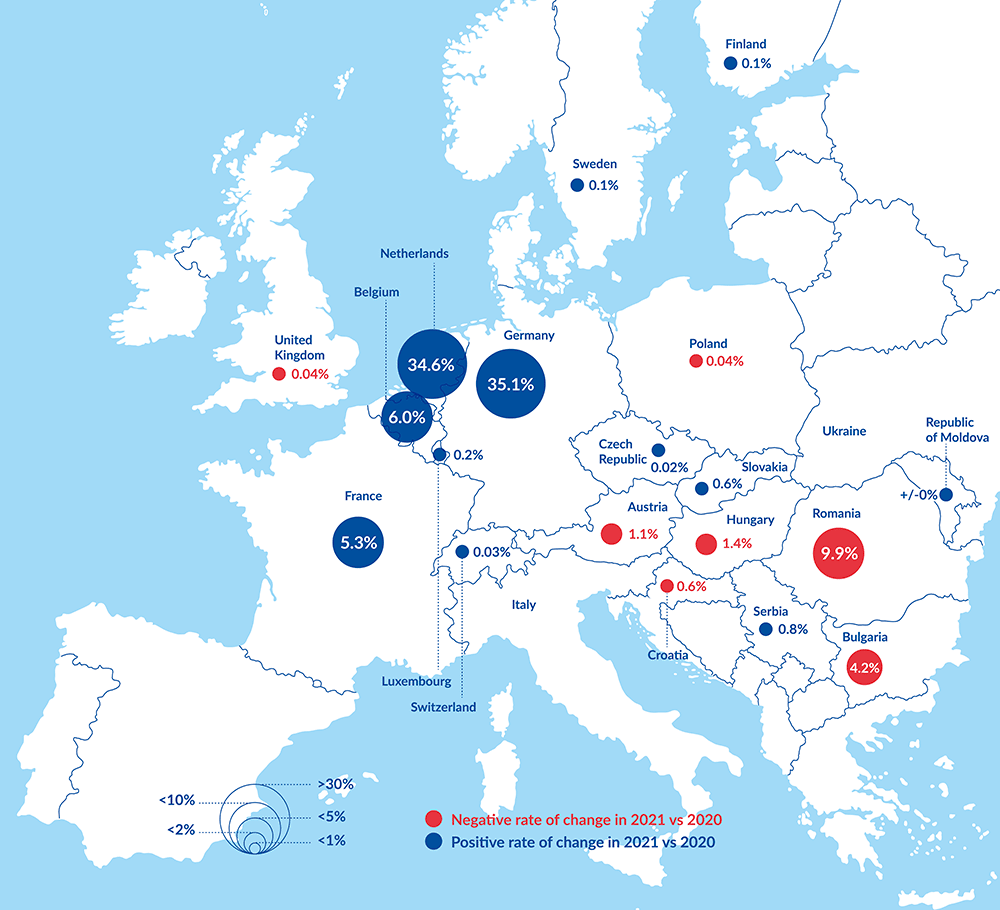 Sources: Eurostat [iww_go_atygo] and [iww_go_qnave], OECD (Switzerland and the Republic of Moldova). The share of IWT performance in Europe in 2021 for Ukraine and Italy is not available due to a delay in the publication of the data.


Sources: Eurostat [iww_go_atygo] and [iww_go_qnave], OECD (Switzerland and the Republic of Moldova)
The 2021 values for Ukraine and Italy are not available due to a delay in the publication of the data. Note: for UK, IWT consists in non-seagoing traffic which is taking place wholly within inland waters and seagoing traffic which crosses into inland waterways from the sea. In this figure, for the sake of consistency with the methodology used by Eurostat, only the transport performance related to the traffic taking place wholly within inland waters is reported (amounting to 56 million TKM). However, it is worth noting that most of IWT in the UK consist in seagoing traffic which crosses into inland waterways (amounting to more than 1.3 billion TKM). Overall, the IWT performance in the UK is reported to reach almost 1.4 billion TKM.


Sources: Eurostat [iww_go_atygo] and [iww_go_qnave], OECD (Switzerland and the Republic of Moldova)
* Data for Ukraine and Italy not available for 2021 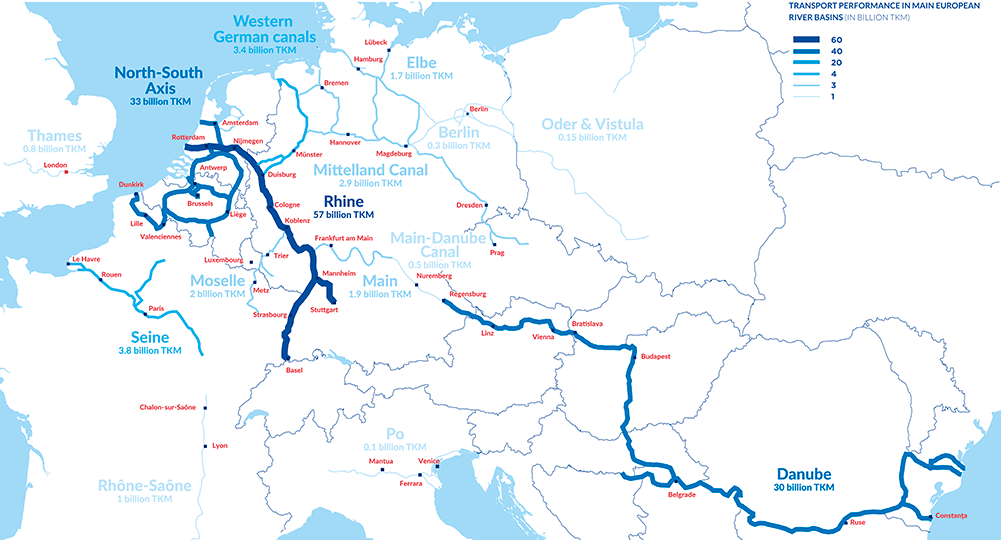 Transport volume and transport performance on the traditional Rhine

FIGURE 4: TRANSPORT PERFORMANCE ON THE TRADITIONAL RHINE (IN MILLION TKM)

Transport activity at different Rhine stretches, on Rhine affluents and on canals linked to the Rhine

TABLE 1: MEASUREMENT POINTS FOR FREIGHT TRANSPORT IN THE RHINE BASIN

FIGURES 5 AND 6: GOODS TRANSPORTED ON THE TRADITIONAL RHINE BY TYPE OF GOODS (IN MILLION TONNES) *

Source: CCNR analysis based on Destatis
* For containers: net-weight


TABLE 2: GOODS TRANSPORT ON THE TRADITIONAL RHINE IN TOTAL AND BY LARGEST GOODS SEGMENTS (IN MILLION TONNES) AND RATE OF CHANGE 2021/2020

Container transport on the Rhine


FIGURE 8: CONTAINER TRANSPORT ON THE TRADITIONAL RHINE (IN MILLION TONNES, NET WEIGHT OF GOODS IN CONTAINERS), 2009-2021


FIGURES 9, 10, 11, 12: CONTAINER TRANSPORT ON THE TRADITIONAL RHINE, DOWNSTREAM VERSUS UPSTREAM TRAFFIC AND LOADED VERSUS EMPTY CONTAINERS (IN 1,000 TEU)

Transport volume and transport performance on the Danube

FIGURE 13: TRANSPORT PERFORMANCE IN FREIGHT TRANSPORT ON THE DANUBE *


Sources: Eurostat [IWW_GO_ATYGO] and [IWW_GO_QNAVE] (Serbia)
* Transport performance in IWT in all EU Danube countries plus Serbia. Data for Serbia available since 2018

FIGURE 14: GOODS TRANSPORT ON THE MIDDLE DANUBE (IN MILLION TONNES) *

CONTAINER TRANSPORT PER COUNTRY IN EUROPE

THE WHOLE EUROPE AND GEOGRAPHICAL STRUCTURE


FIGURES 17 AND 18: IWW MODAL SPLIT EVOLUTION IN RHINE AND DANUBE COUNTRIES (IN %, BASED ON TONNE-KILOMETRES) *

9. Source: Moselle Commission (2022), report ‘Verkehrszahlen Mosel 2021’
10. Around half of the coal that is imported by Germany and transported on the Rhine is used for producing electricity and heating energy. The other half is used for producing steel.
11. For a short history of the economic development between 2005 and 2020, see: IWD (2020), IW-Konjunkturprognose: Wirtschaft erholt sich langsam, https://www.iwd.de/artikel/iw-konjunkturprognose-wirtschaft-erholt-sich-langsam-484045/ (last consulted 25 May 2022)
12. Source: viadonau, several annual reports available at https://www.viadonau.org/newsroom/publikationen/broschueren (last consulted 22 July 2021)
13. https://www.acn.ro/index.php/de/
14. https://www.afdj.ro/en
15. Source: Weekblad Schuttevaer (14 July 2021), ING: ‘Vervoer grondstoffen over de Rijn trekt aan door grotere vraag’
16. Next to these two factors, the economic crisis in steel production, that started in 2018, played another role.