• Transport performance on inland waterways in the EU increased by 4.3% in the first half year of 2021, compared to the same period one year earlier. The recovery was mainly driven by the dry cargo sector.
• Passenger transport started to recover only in the second half of 2021. However, the number of passengers, and therefore the capacity utilisation of the cruise vessels, remained rather low. 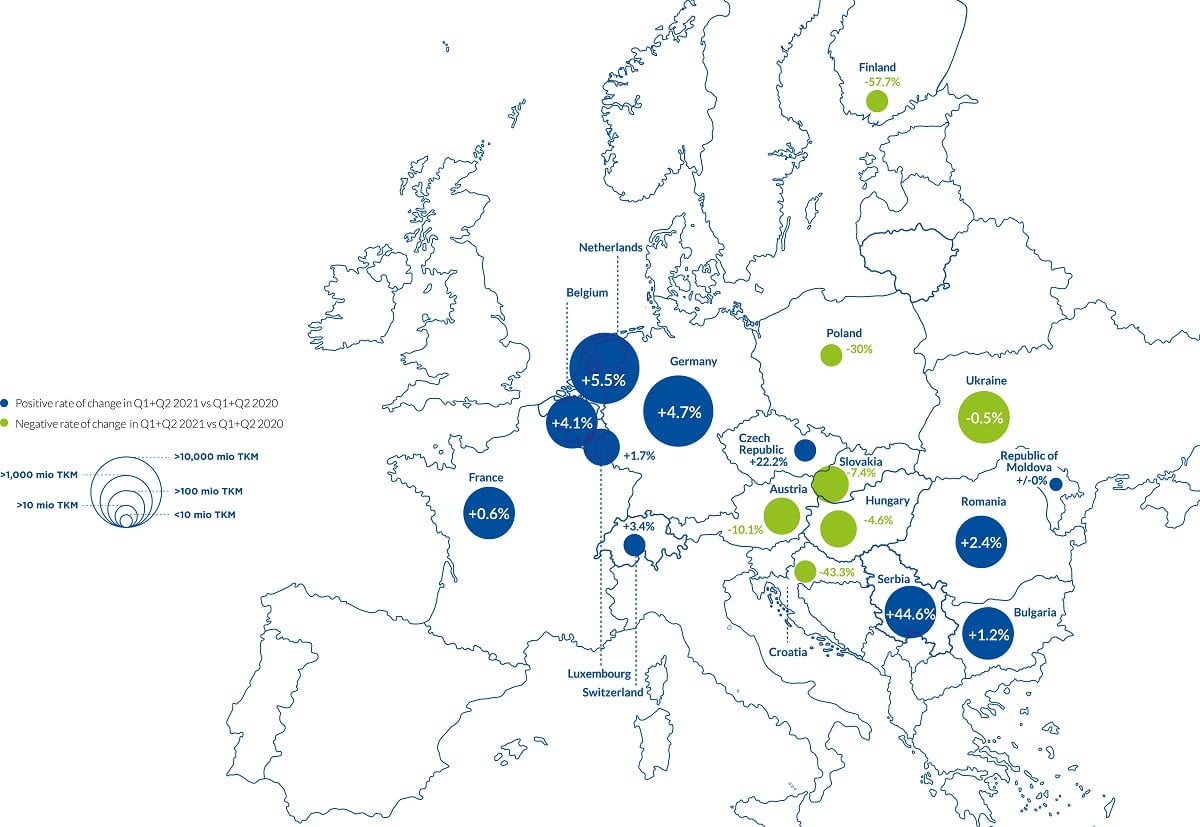 Sources: Eurostat [iww_go_qnave], OECD (Republic of Moldova, Switzerland, Ukraine)
* For the UK, data were not available.

FIGURES 2 AND 3: RHINE TRANSPORT VOLUME UPSTREAM AND DOWNSTREAM FOR MAJOR CARGO SEGMENTS (IN MILLION TONNES, FOR Q1-Q3 OF 2020 AND 2021)


FIGURES 4 AND 5: MIDDLE DANUBE TRANSPORT VOLUME UPSTREAM AND DOWNSTREAM FOR THE MAJOR CARGO SEGMENTS (IN MILLION TONNES, FOR Q1-Q3 OF 2020 AND 2021)*

Source: Danube Commission market observation report
* Detailed data according to goods segment and quarters are only available for the Middle Danube at Mohács.

FIGURE 6: NUMBER OF RIVER CRUISE VESSELS PASSING THE LOCK OF IFFEZHEIM ON THE UPPER RHINE PER HALF YEAR


FIGURE 7: NUMBER OF RIVER CRUISE VESSELS PASSING THE LOCK OF IFFEZHEIM ON THE UPPER RHINE PER MONTH


FIGURE 8: NUMBER OF RIVER CRUISE VESSELS PASSING THROUGH THE LOCK OF JOCHENSTEIN NEAR PASSAU ON THE UPPER DANUBE PER MONTH


Source: Eurostat [iww_go_qnave]
Due to a lack of plausibility of Stat.Bel data as from Q1 2018, the data for Belgium from this quarter onwards were recalculated. This was done by applying the rate of change that is present in the more plausible data from the Flemish waterway administration (De Vlaamse Waterweg). The series for Belgium then follows the trend for Flanders, but is located on a higher level. Compared to previous editions, it was decided to add Serbia, due to high IWT volumes in this country in recent times.

1. The total number of cruise passengers before the Covid crisis was 1.79 million in 2019 (without Russia and Ukraine). The share of Danube, Rhine and affluents is calculated based on vessel and passenger statistics at locks. Data sources are the waterway administrations.