TRANSPORT IN EUROPE AND BY COUNTRY 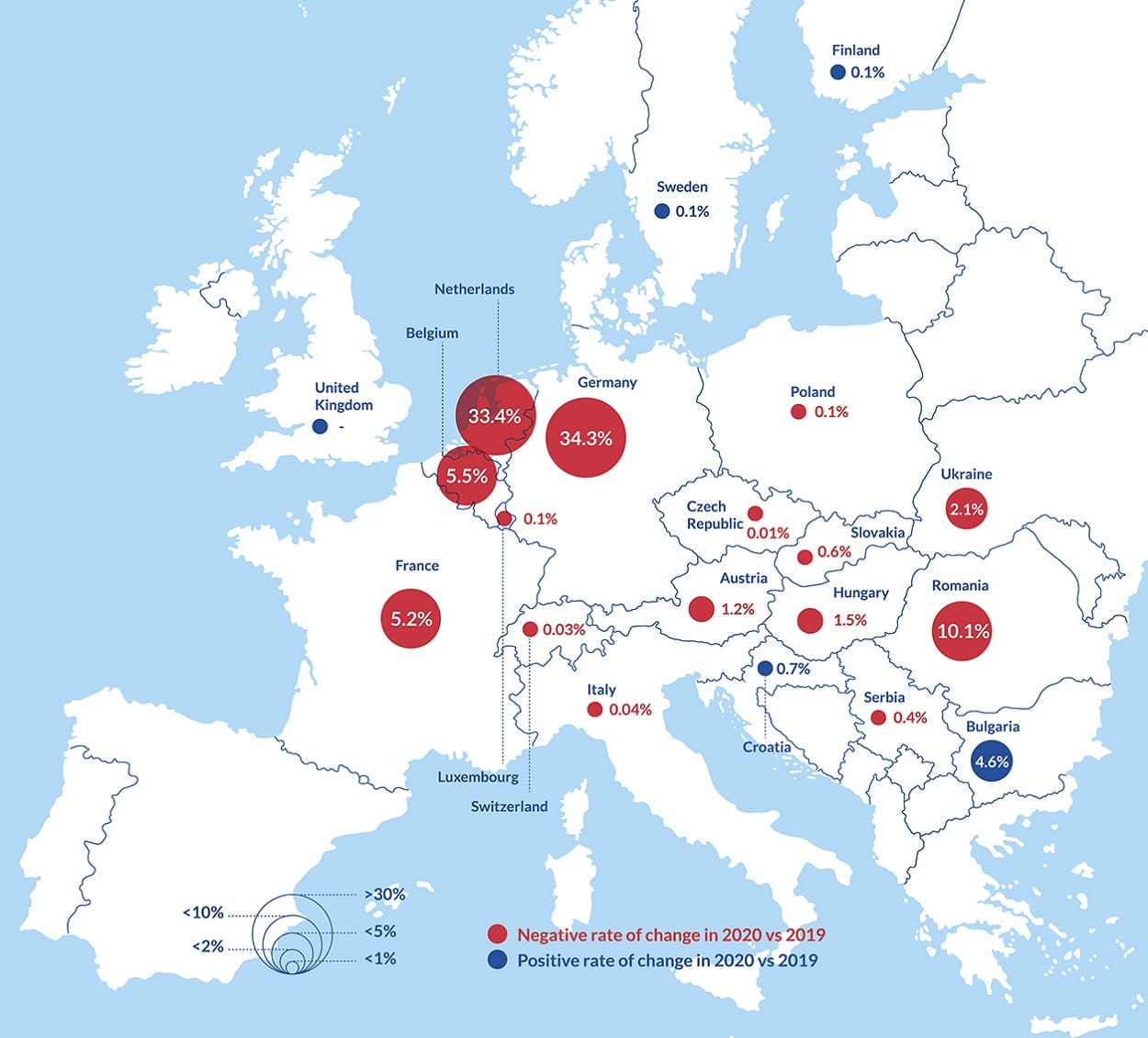 Sources: Eurostat [iww_go_atygo], OECD (Serbia, Switzerland, Ukraine)
The share of IWT performance in Europe in 2020 for the United Kingdom is not available due to a delay in the publication of the data.

Chart by Visualizer
Sources: Eurostat [iww_go_atygo], OECD (Serbia, Switzerland, Ukraine)
The 2020 value for the United Kingdom is not available due to a delay in the publication of the data.

Chart by Visualizer
Sources: Eurostat [iww_go_atygo] and OECD
* Data for UK not available for 2020

Chart by Visualizer
Source: Eurostat [iww_go_atygo]
* EU-27 according to member countries in 2020 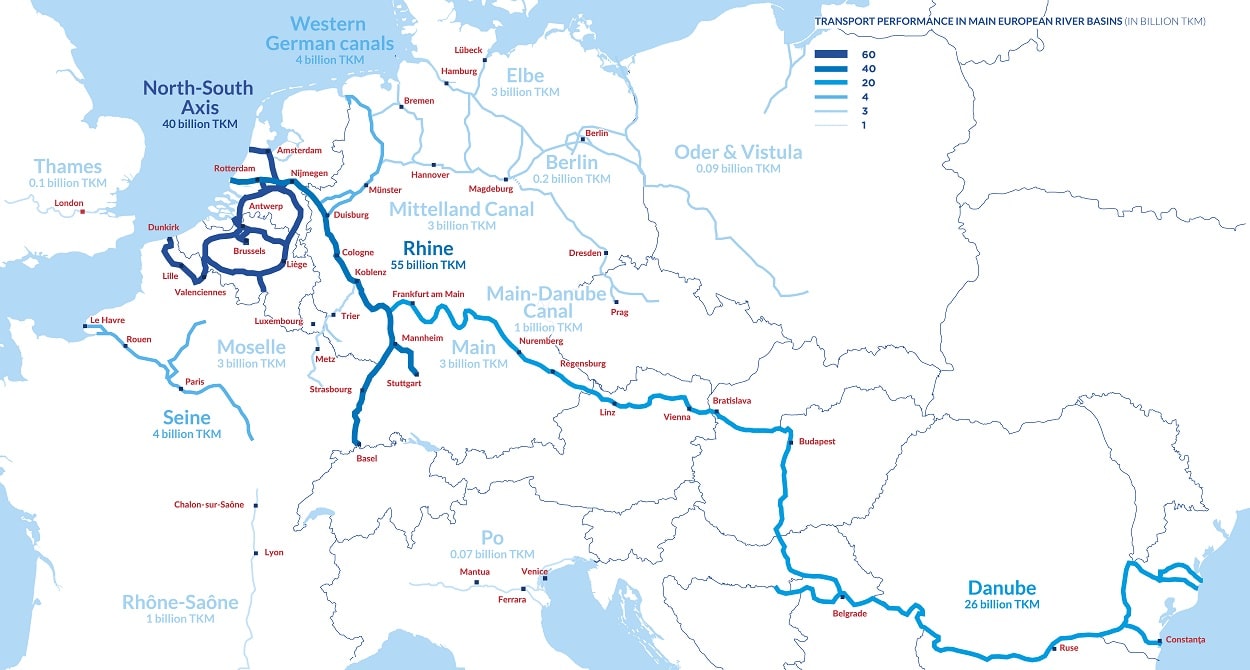 Transport volume and transport performance on the traditional Rhine

FIGURE 4: TRANSPORT PERFORMANCE ON THE TRADITIONAL RHINE (IN MILLION TKM)

Chart by Visualizer
Source: CCNR analysis based on Destatis

TABLE 1: MEASUREMENT POINTS FOR FREIGHT TRANSPORT IN THE RHINE BASIN AND RATE OF CHANGE 2020/2019


Source: CCNR analysis based on data of the German Waterway Administration

FIGURE 5: YEARLY FREIGHT TRANSPORT AT DIFFERENT MEASUREMENT POINTS ALONG THE RHINE AND ITS AFFLUENTS (IN MILLION TONNES)

FIGURES 6 AND 7: GOODS TRANSPORTED ON THE TRADITIONAL RHINE BY TYPE OF GOODS (IN MILLION TONNES)*

TABLE 2: GOODS TRANSPORT ON THE TRADITIONAL RHINE IN TOTAL AND BY LARGEST GOODS SEGMENTS (IN MILLION TONNES) AND RATE OF CHANGE 2020/2019

Transport volume and transport performance on the Danube

FIGURE 8: TRANSPORT PERFORMANCE IN FREIGHT TRANSPORT ON THE DANUBE (IN MILLION TKM)*

Chart by Visualizer
Sources: Eurostat [IWW_GO_ATYGO] and OECD (Serbia)
* Transport performance in IWT in all EU Danube countries plus Serbia

FIGURE 9: YEARLY FREIGHT TRANSPORT AT DIFFERENT MEASUREMENT POINTS ALONG THE DANUBE AND ON THE DANUBE-BLACK SEA CANAL (IN MILLION TONNES)

TABLE 4: GOODS TRANSPORT ON THE SULINA CANAL IN MILLION TONNES BY DIRECTION

FIGURE 10: GOODS TRANSPORT ON THE MIDDLE DANUBE (IN MILLION TONNES) *

CONTAINER TRANSPORT PER COUNTRY IN EUROPE

Chart by Visualizer
Source: Eurostat [iww_go_actygo]
* The figures for the countries cannot be added together because this would incur double counting. The total value for EU-27 takes into account cross-border container traffic.


FIGURE 12: CONTAINER (TEU) FLOWS FROM LOADING REGIONS IN THE NETHERLANDS TO REGIONS OF UNLOADING (NUTS 2) 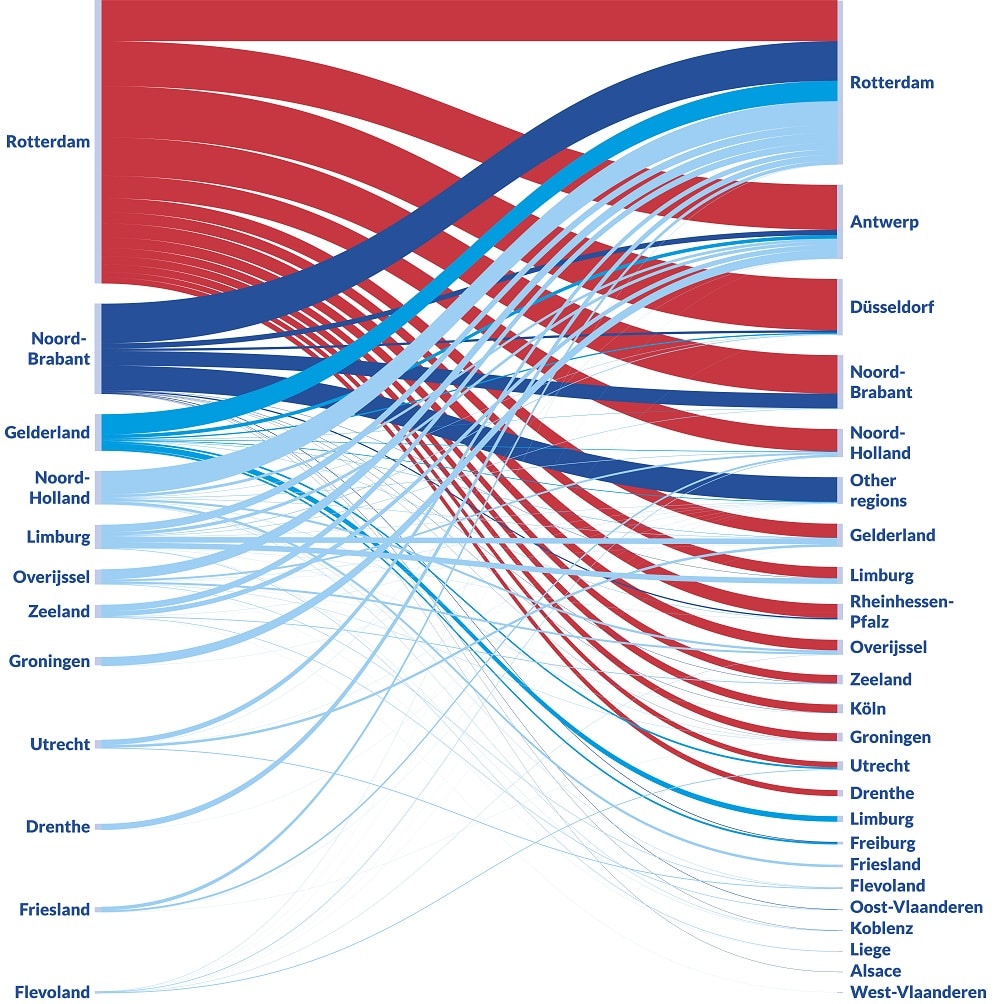 FIGURES 14 AND 15: IWW MODAL SPLIT EVOLUTION IN RHINE AND DANUBE COUNTRIES (%, BASED ON TONNE-KILOMETRES)*

4. Data for specific measurement points are provided by the German Waterway administration. The advantage of this method of measurement points is that it does not entail any kind of estimation, in comparison with the Destatis method which calculates an estimated Rhine transport, and thereby also uses assumptions about loading and unloading locations of the cargo for cases where information provided by skippers and ports is not sufficient. Although these assumptions reflect the reality to a high degree, they are not free from possible inaccuracies. On the other hand, the drawback of the method of the German Waterway Administration (method of measurement or border points) is that it measures cargo traffic only at one specific point of a river, while the Destatis method attributes each transport activity to certain rivers (see description in the glossary).